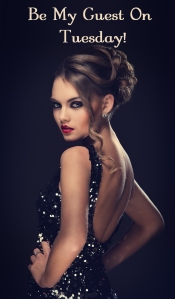 Welcome to the afternoon edition of Be My Guest On Tuesday. In case you missed Felicity Brandon‘s morning appearance, you can read hot excerpts of her historical novel Viking’s Conquest  here. Now I’d like to greet another lady with a wicked imagination, Lisette Kristensen. She is an avid explorer of the dark side of BDSM, a writer of a modern day, character-driven “bodice rippers”. If you haven’t met Lisette and her writing now is the time for that. Her series Dark Desire, a boxed set of 4 books, is currently available for the reduced price of $1.50 from $2.99. You can claim your copy today on Smashwords.

The strength of his voice coursed through her. She dropped into position. “Spread open your thighs.” Without thought she opened herself, feeling the warm air float over her soaked sex. His fingernails raked along her spine, causing her stomach to knot until they reached her shoulders. Trying to fathom everything around her, the platform began to move. A slow turning effect that startled her. She looked at the men seated before her. Mask hid their identities, but what they wanted with her was a mystery, that alone made her heart thunder with anticipation.

The dais kept turning; she couldn’t comprehend what would happen next. It didn’t take long. The first strange noise behind her, led to a burn to her backside, like she had never felt before. Her eyes bulged, and before she could yelp, another blow ripped across her backside. Her ass felt on fire, then another strike hit her aching ass. The pain was excruciating at first. Tears welled in her eyes, trying to comprehend what felt like pleasure racing up her spine. A part of her wanted it to stop; the desire to sob was overwhelming, but each stroke brought a pain-pleasure confusion that seized her soul.

“He grunted harder now as each stroke came faster. The blows rang deeper into her soul, every sense that poured through her was like tiny hot daggers poking her. Every thought worry or concern evaporated. A change inside her swept in, thoughts drifted into a place, like a growing mist, ethereal and warm. Her body flailed, sweat trickled in rivulets over her welted flesh.”

Whoever wielded the belt had a strong arm. The lashes were heavy, and the leather lacquered her backside raw. The pain rippled through her body. Her eyes remained closed, to let the sensations control her feelings.  Jocelyn let it go, letting her depraved soul take over, funneling the dark bliss to her core.

Each blow across her sore ass brought a thickening to her sex. Oh, how she wanted to wiggle it at them, to tease them to fuck her insane.  Jocelyn kicked into a sensual overdrive; the wish to be used came faster. The signals of deviancy were present under the surface. Soon, that depravity would rise to the surface.

The slaps of leather slowed; she figured the man grew tired.  She could sense the men teasing him; they called him Dieter.  Jocelyn tried to peek to get a good view.  Her vision was blocked, but she could make out parts of him. No shirt, large cock jutting out through his jeans. Muscles layered over his chest and abs.  Her body tingled, her sex slathering with rampant need.  She wanted to scream, “Fuck me!”. Everything blistered hot, aching for this party to get started.

She tried to watch, but her eyes had been blocked by a black cock.  It was gigantic.  Where did it come from? She’d not seen a black man before. Thick dark fingers wrapped onto it, waving it back and forth over her face.  She sighed, relishing the silky texture of it.  The veins throbbed along her cheek, the gorged head brushing her lips.  A droplet of his anticipation coated her chin.  Jocelyn wanted that monster stuffed into her mouth.  The thought of sucking his beast of a prick made her delirious.

Instinctively her fingers lifted from the table. Fingernails danced magically down the shaft.  His hips nudged forward, enticing her, seducing her wantonness.  Jocelyn spread her mouth and devoured his shaft. The second her lips caressed his cock; he slammed forward with his hips. Nailing his big cock down her throat. She gagged, spit drooling down her chin.  She heard the men cheer, and that only egged on her desires.

Jocelyn found that place of relaxation, letting him fuck her face the way he wanted it. He stroked his prick ruthlessly into her mouth. She wouldn’t be out done. She sucked on it hard, almost biting that thick knob.  Her fingers found his balls, massive in their own right. They tightened around them, squeezing them as he plundered her mouth. Jocelyn heard the groans with each ramming thrust.

So lost in sucking his black cock, it took a moment for her senses to register the shoving of another cock into her pussy.  It too was thick. She pushed her hips up, to take it all the way. She went crazy to the feelings that consumed her. Her body relished it, craved every delicious raping of her flesh.  Two cocks hammered at her with a fury: one almost at the breaking point in her mouth and the other finding his groove in her sopping sex.

A cock riding her writhing snatch drove her into another direction.  The mingling of divergent sensations pushed her to a breaking point. Every part of her sparked the wick lit and was ready to explode.  Her ass throbbed from the belt, and these two cocks nailed her dark soul to the plank of wicked delights.

Everything inside Jocelyn sheared off into another plane. Her body quivered, her sex collapsed around the intruding prick. She didn’t care what man plundered her pussy; she wanted more of it. Her hips wiggled, begging for more of the assault of cock.  Her eyes opened to a blur of movement. They circled her, stroking their cocks. Jocelyn blinked, trying to focus but the hard thrust behind her pulled her back into the sexual deviancy that consumed her.

She groaned out loud when his hands smacked her tender ass.  His cock ram-rodded her pussy, with her shoving back to get it all. She craved this man, unseen, unknown, but how he took her. The ravaging took over her senses; again she drifted into that place of salacious need. Jocelyn didn’t hold back; her pussy clenched around the plunging shaft that buried to her core. She thrashed to the table, out of control as another orgasm swept over her like a wave.

She heard Devin laugh in that mocking tone.  Jocelyn was pissed, at herself for being careless mooning over Stafford.  She admonished herself for being stupid.  Her eyes wheeled back to Devin. Spotting the arrogant pricks pleasure in what he had done.  Now the game was on. Her body slowly took back control, the dark winds of need whipped through.  The next blow slapped hard against her breast.  That strike sent her breast swaying, and the weights clashed together sending a ripple effect into her aching nipples. That sensation was wicked. The multiple effects where hard to fathom. Pain, misery, and torture filled her soul.

Every whack of the crop delivered various bolts of pain into her body.  Her pussy ached to feel it, when it landed to her clit she flailed like a whore getting fucked. Her back couldn’t stay off the tines of wire.  Those sharp points devoured her back, eating her flesh like cannibals.  Each spike caressed a part of her. Drawing a deeper wantonness within her, it is her desires would focus. The crop and nipples clamps were like beacons to her darkest desires.

Jocelyn now found her spot. Eyes closed. Letting the depravity take over. She crossed into that space of hedonism where the pain became the magic carpet of pleasure. She no longer cared what Devin did; she wanted to scream at him to hit her harder, pull her deeper into the thundering waves of bleakness.

Her back and ass rode the wall of wire, letting the tines nourish themselves as the crop slapped her clit to the breaking point. Jocelyn held nothing back. She whimpered, writhed and moaned wantonly as each sensation tripped her spirit into a place of depraved peace.  Like all her scenes, the men tuned out, the whole focus on those sparks of pain that sent Jocelyn reeling into the abyss of her own.

I started writing in 2009 on a dare by a friend.  I am a huge “bodice ripper” fan of Historical Romance. Still read it all the time, in fact, I am mired in a long series of books by Barbara Devlin.  Anyway, I was bitching there was not enough sex in them, she said, well do better loudmouth.

Back to dark filth …

I had intended to leave it as a one off, short story, but you fans wanted more, and that resulted in the four book series, called Dark Desire.

Her new world is tested time and again as she runs into situations that would strain even the darkest of women.  Until one man comes into her life to steal her heart, or does he?  Even the most depraved woman wants some romance, right?

Thank you for joining me this afternoon and meeting Lisette, her flawed leading ladies and wicked heroes. In the evening you’d get to know my last guest, the lovely debutante Bree Lewandowski, and her ballet dancer romance novel, Under Winter Lights.

2 thoughts on “Be My Guest On Tuesday: Lisette Kristensen and The Dark Desire Series Boxed Set”